The carbon dioxide laser (CO2 laser) was one of the earliest gas lasers to be developed. It was invented by Kumar Patel of Bell Labs in 1964, and is still one of the most useful. Carbon dioxide lasers are the highest-power continuous wave lasers that are currently available. They are also quite efficient: the ratio of output power to pump power can be as large as 20%. The CO2 laser produces a beam of infrared light with the principal wavelength bands centering on 9.6 and 10.6 micrometers (μm). 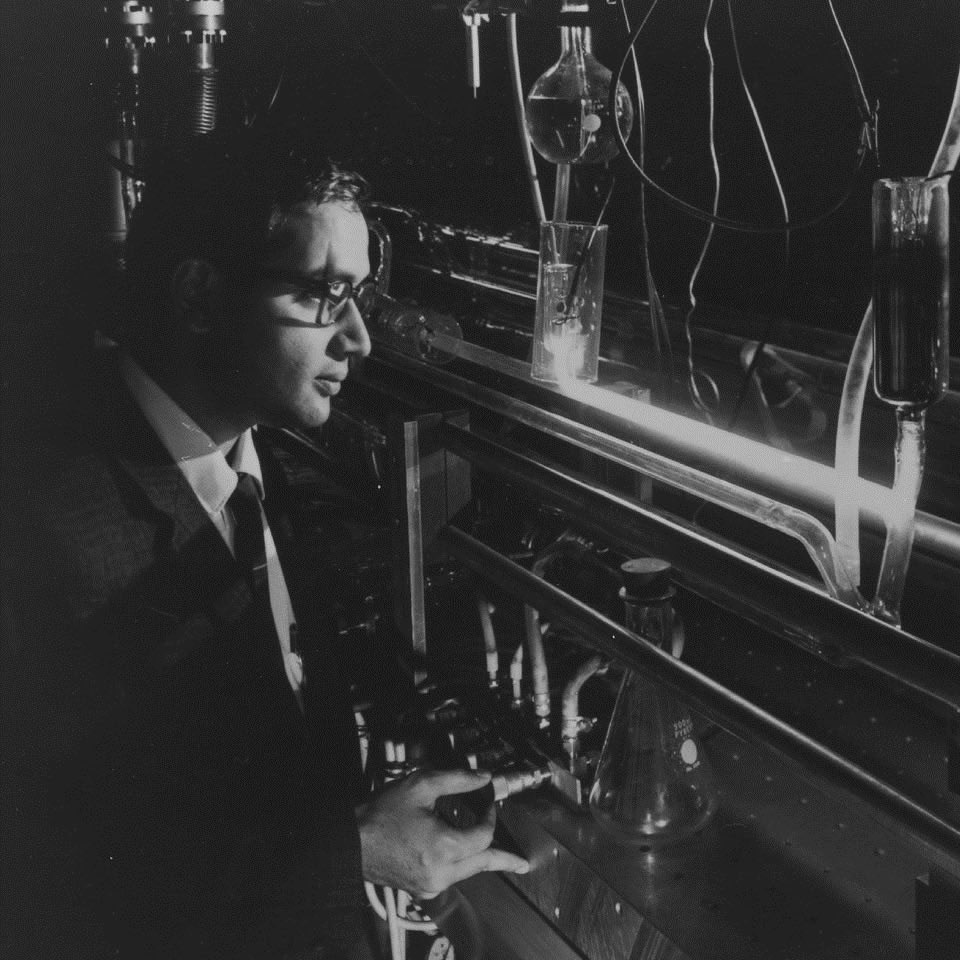 The Thunder Laser Nova series CO2 laser gantry engravers employ a high-quality (SPT and Reci) Chinese glass tube. Every tube is inspected and tested to ensure that it conforms to our stringent specifications. One of those specifications is that every Thunder Laser must produce at least 10% over the rated tube power.

This is what goes into an SPT glass tube:

These tubes are water-cooled and DC excited. This means that a laser power supply (LPSU) of 30kVDC could be capable of delivering currents of well over 50mA.

The high-voltage distribution will be with a thick red wire. Read all warnings and refer to the manual for guidance.

This is pretty much all we need to know about the basic function of the tube itself... for now.

Let's identify some parts of the tube for reference:

The anode (positive terminal) is the one on the back side of the tube with the big red wire we mentioned above. The cathode (negative terminal) is on the front near the output lens (output coupler, OC).

It's a good idea to snap a picture of your tube label, model number, and serial label (on the rear of the laser) to save them for future reference. 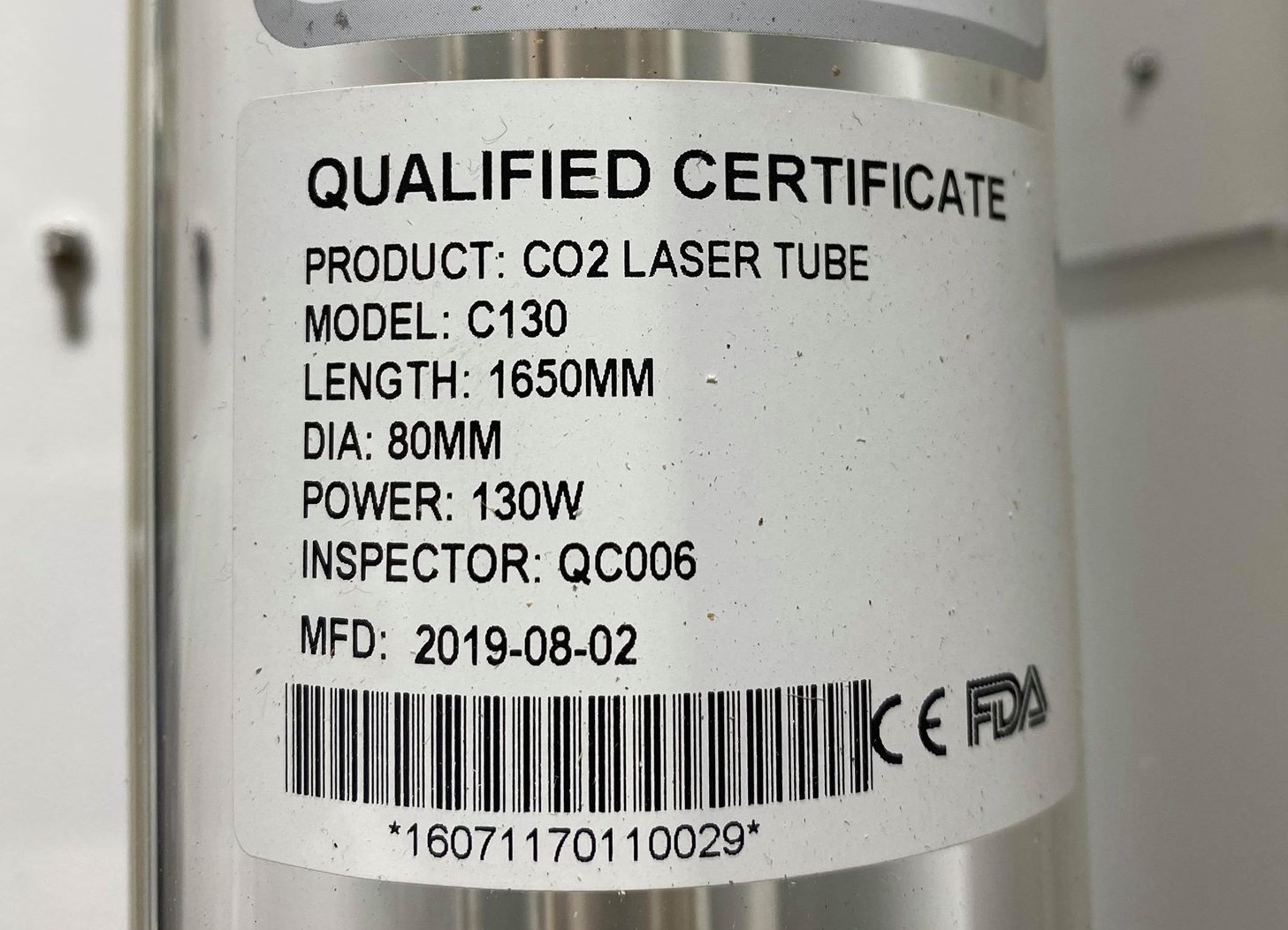 Direct Current excitation in DSP controlled lasers is pulse-width modulated. The LPSU does not excite the tube with a constant output, but rather pulses rapidly. This is how the power is varied. When the power remains constant, even when vectoring, the trigger still pulses. This is very similar to how a 110VAC incandescent light actually cycles on and off, 60 times every second (60Hz).

DC excited tubes cannot pulse as fast as RF excited tubes. The larger the tube, the more this behavior manifests. ThunderLaser offers RF machines as well, which we will cover in a separate article.

The striking voltage (ionization threshold) is the point where the power modulation is sufficient enough to maintain steady ionization in the pumping chamber. This will output a uniform beam signature and density. Longer, higher-powered tubes will have a higher threshold.

Once you exceed the threshold there is still a range just above it where the stability may very. This has been identified in our 100w machines and is evidenced in the appearance of the arc pattern at the anode. Here is more on that:

These glass CO2 tubes have a finite life, which varies with the brand and quality. The lifespan of the Thunder Laser tube is reported to be 2000 to 4000 hours under normal operation. The primary reason for tube degeneration is the metal vapor deposition that occurs within the pumping chamber as well as the degeneration of the gasses inside the tube.

When the tube fires, an arc (and resulting plasma discharge) is produced between the anode and cathode. These electrodes are usually tantalum. The arcing vaporizes the metal, which gets deposited on the optics within the pumping chamber. Over time, this degrades the performance of this tube. This is a normal condition. The 2 biggest killers of co2 glass tubes are overheating and overdriving. Firing the tube regularly does help regenerate or help balance the gasses to a small extent. It is not recommended to keep a 'spare' tube as they also have a shelf life. The inventory is perishable and rotated carefully to ensure the 'freshest' tube. That is not to say that a tube can't sit shelved or idle for 6 months or a year, you just don't want it dormant for extended periods.

We use high-quality LPSUs and we calibrate them to the tube so you won't overdrive the tube on a Thunder Laser. The delay in time from the moment the LPSU is triggered to the time it actually fires is less than 1 millisecond, which is fast for laser engravers. However, even the best electronic equipment is not 100% efficient, so this time to fire is actually quite slow, as far as electronics go.

When the LPSU fires, there is a bit more delay before the beam is actually formed. Again, this delay is fast as far as lasers go, but still has some effect.